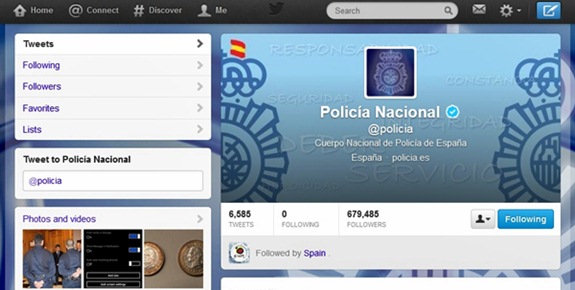 If you’re looking for one of the most popular Twitter accounts in Spain, you might not have to look any further than the Policia Nacional, Spain’s national police force. That’s because they currently have almost 700,000 followers of their @policia Twitter account, and over four million views of their YouTube videos. All in the name of solving crime in Spain, of course.

Not only is it second to the FBI in the most followed law enforcement agency, but the Spanish Policia Nacional tweets are also re-tweeted more than those of any other governmental organization anywhere in the world.

Why is the Policia Nacional so popular on Twitter?

So why is the Policia Nacional a hit on Twitter? That’s simple, and it’s all because they’ve figured out the way to really make Twitter work for them. Instead of just posting statements, like most other governmental organizations worldwide, the Policia Nacional have used their @policia account to engage the people who follow them and get them to help the police fight crime.

They post tweets about wanted criminals, tweets about not drinking and driving, and tweets warning people that drugs will ruin their lives — but all using every day language Spaniards, and particularly young Spaniards, can relate to.

Instead of talking ‘at’ them, they’re talking ‘to’ them, and showing themselves as an agency that is there to help everyone’s communities and lives be even better. In response, the Spanish public has turned in drug dealers, pedophiles and other criminals by using the @policia Twitter account or Policia Nacional website.

One of the most successful Policia Nacional YouTube video campaigns to date has been a video about bullying in school.

In a simple video that kicks off a national campaign against bullying in Spanish schools, it shows a girl being bullied at school by all her classmates and, how, instead of ignoring it and hoping it goes away she writes a letter and reports the bullies to the police. The commentary beneath the video tells young Spaniards never to ignore bullying, but instead to report it to an adult or to the Policia Nacional at seguridadescolar@policia.es.

Last summer, the Policia Nacional even produced a video for non-Spanish speaking visitors to Spain. In English, it tells visitors to Spain how to protect themselves from crime or from injury, by following a few simple guidelines.

You can watch the video below.