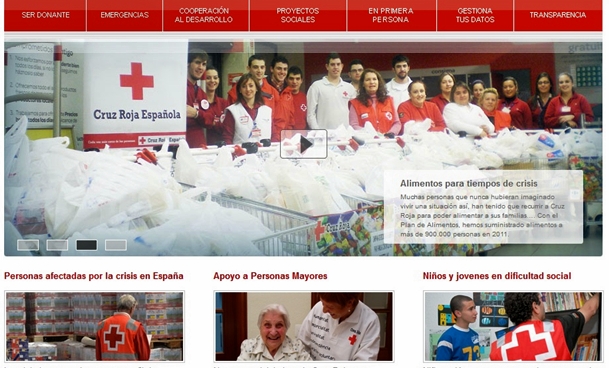 Things are so bad in Spain economically, next week the Spanish Red Cross (Cruz Roja Espanola) will start its first-ever charitable appeal asking people for money to help Spaniards in crisis.

The appeal, called “Now More Than Ever” will ask for donations to help an estimated 300,000 more Spaniards than last year, although if the economic crisis continues to worsen in Spain the Red Cross may need to help even more people than that.

In its long history, the Spanish Red Cross has only ever asked Spaniards for donations to help people in need in other countries. With so many Spaniards now living in poverty, however, and unemployment at its highest level in decades, more and more Spaniards are asking the Red Cross for help.

That is why they are hoping to raise up to 30 million euros in the next couple of years, so they can help destitute Spaniards who need food, clothing or money to pay rent or bills.

Red Cross spokespeople also say this new campaign is not just about raising money. It’s also to draw even more attention to the millions of Spaniards who are now struggling to survive, with the hope that others will take note and help their neighbors who are in need.

If you would like to donate, you can currently do so here.