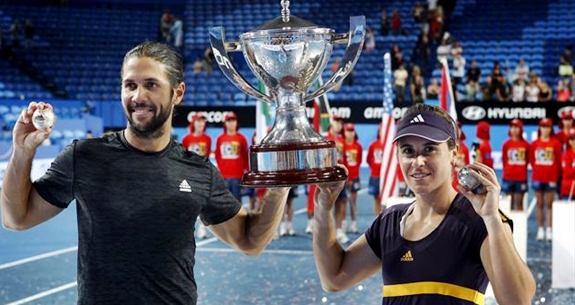 The Spanish team of Fernando Verdasco and Anabel Medina Garrigues beat Serbia’s Novak Djokovic and Ana Ivanovic in a surprise victory on Saturday to win the Hopman Cup in Perth, Australia. It was the fourth Hopman Cup win for a Spanish team since their first appearance at the event in 1990.

The mixed doubles match was expected to be an easy win for the Serbian team of Djokovic, the current world’s number one tennis player, and his partner Ivanovic. So imagine the surprise of the crowd and the commentators when Verdasco and Garrigues took the prize with a 2-1 win over Serbia.

Then, when the Spanish pair got together for the mixed doubles final, Garrigues served the final set wonderfully well and Verdasco lobbed the final ball home to clinch a 6-4, 7-5 win for Spain over Serbia.

Congratulations to the Spanish team for their fourth Hopman Cup win. It’s always lovely to see Spanish sportsmen and women doing so well.