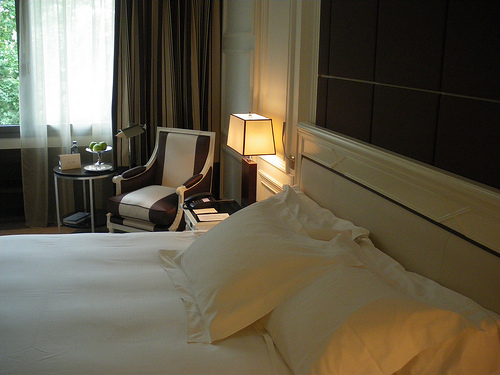 A Spanish couple woke up in bed in their holiday apartment in Ibiza on Saturday to find a drunk British man lying half-asleep on top of the woman. The trio apparently woke up at the same time and, after the woman started screaming with shock at finding a stranger in bed with her and her boyfriend, an argument ensued, during which time the couple tried to get the man to leave.

The man Gary Stuart Oddie was apparently staying in an apartment across the hallway. After he left but continued to bang on the door, the couple had not choice but to call downstairs to reception and the man was promptly arrested on a charge of breaking and entering and thrown in jail.

Oddie either drank too much or took drugs, but Spanish police say he appeared to be drunk. Either way, he managed to get into the Spanish couple’s apartment and climb into bed with them, without the apartment buildings’ security guards being aware of his presence.  The apartment complex is located in Ibiza Town.

Odie appeared in Spanish court on Sunday where state prosecutors demanded he pay compensation to the Spanish couple ahead of a trial. He could receive time in jail and a large fine if found guilty.