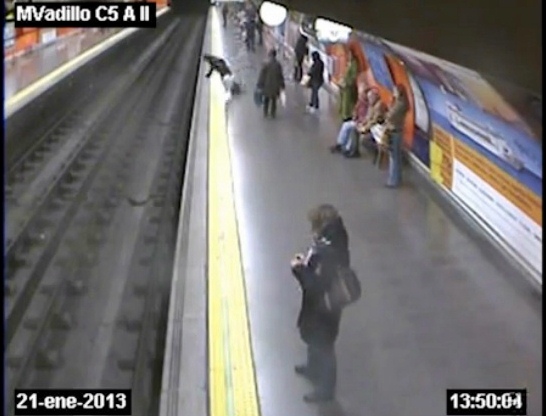 A 51-year-old woman in Madrid, Spain may not still have been with us today if it wasn’t for the quick thinking of an off-duty Spanish policeman. The woman was standing on a subway platform in Madrid this week when she suddenly fainted, pitching forward and down onto the train tracks. The policeman, seeing her fall, jumped onto the tracks, picked her up and carried her away from the front of the oncoming train.

Others on the platform also helped, waving at the train as the driver pulled into the station so he was able to stop the train before reaching the woman and the police officer. People at the opposite side of the platform helped the police officer pull the woman back up to safety. If it hadn’t been for the quick action of all parties concerned, the poor woman’s life may very well have been over.

The woman, simply called María Luisa N. in Spanish news media, was taken to a Madrid hospital, where she was said to only have been slightly injured (when you faint, your body relaxes and that can minimize trauma). The off-duty Spanish policeman, Rubén A. G, then went on to his scheduled class, where he’s studying in an attempt to gain promotion in the force.

It’s also not the first time this police officer, while off duty, has saved a life. In Croatia last year, he saved a four-year-old girl from drowning. “Two lives in eight months”, he said proudly when asked. Good for him.

All we can say is his heroic actions this week are likely to have helped him get that promotion even sooner. If they don’t, they should.

By the way, if you can read Spanish, you can find more on the story in the Spanish version of El Pais here.