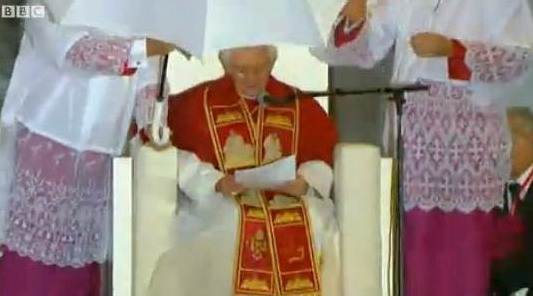 The Pope’s planned speech in front of hundreds of thousands of Spanish youth had to be called off yesterday after a massive storm forced him to abandon it just a couple of minutes in. The speech was to be made at an aerodrome outside Madrid on Saturday but, once the wind and rain whipped up, there was no way he could continue.

For some people, that wasn’t necessarily a bad thing as the Pope was going to talk about “marriage being between a man and a woman” and the right to life. Who knows — maybe God was intervening?

That the Pope continues to go down this path when the Catholic Church in Spain is dying and tens of thousands of Spaniards every year turn away from it is bemusing.  As Spain has already legalized gay marriage and abortion, it’s more bemusing still.

Of course, the Pope didn’t talk about the mass sexual abuse in the Catholic Church, sexual abuse that went on for decades and was covered up by the church. After all, he’s always too busy telling other people how to live their lives than worrying about what his own folks are doing.

Many Spaniards too are angry the Pope was allowed to visit Spain. His trip cost the country €50.5 million and is money many Spaniards don’t feel should have been spent during the country’s massive economic crisis and high unemployment rates.