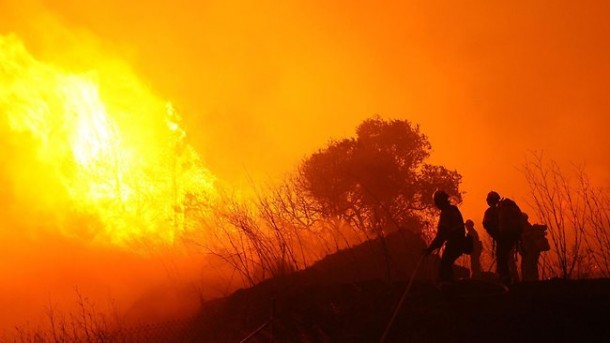 As wildfires in the Alicante area of Spain continue to burn, two firefighters died as they battled the blaze. The fires burning around the forest of Torre de les Macanes north of Alicante are thought to have been started by accident after a car broke down and then burst into flames when its hood was lifted. The flames moved off the car and into grassland, and were soon raging out of control.Two other firefighters remain in hospital.

Meanwhile, at least six other wildfires are burning in other areas of Spain and, in some places, are so bad that tourists have had to be evacuated from towns close to them.

On the Canary Island of La Gomera, almost 1,000 tourists were evacuated from a main tourist spot by boat after flames could be seen headed towards the town. The town authorities believed, if firefighters were not able to get them under control quickly, they could soon end up engulfing the town, and so tourists were asked to evacuate. Almost 5000 residents were also taken to other parts of the island, but returned as the blaze came under control.

2012 has been a bad year for Spanish wildfires, with many of them raging in various areas of Spain over the last 2-3 months. The excessive heat has been thought to be responsible for some of them as Spain suffers yet another heat wave, along with having recently had its driest winter in almost 70 years. Other fires were deliberately started by arsonists.