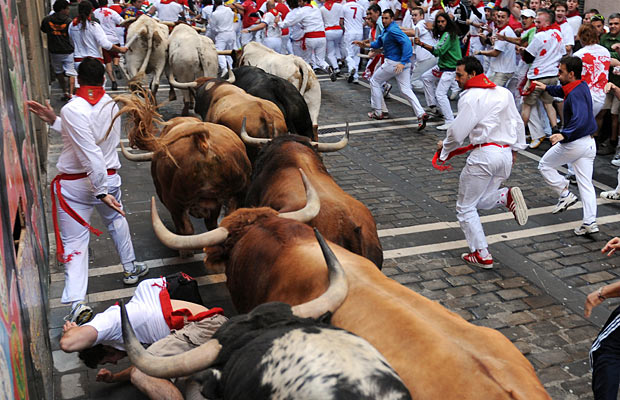 Injuries just keep piling up in Pamplona in the San Fermin festival’s bull run. With an Australian and a Frenchman gored over the weekend, Tuesday saw two more people getting gored — this time a 40 year-old man from Pamplona who was gored in his side and a 41 year-old man in his shoulder. At least six other people were treated for injuries sustained during falls.

Today’s bull run in Pamplona was the sixth in the series of eight and was the fastest so far, with a time of only two minutes 16 seconds.

The Pamplona bull run is, unfortunately, extremely cruel and, to many, it is amazing Spain still allows it to go on. The bulls spend several minutes running through the streets, terrified of the noise, gore people on their way down simply because they’ve no idea what’s going on, then…..are usually killed in a bull fight. Not exactly humane, is it?

Watch the following video of various ‘gorings’ during the San Fermin festival bull run and you’ll see what we mean.