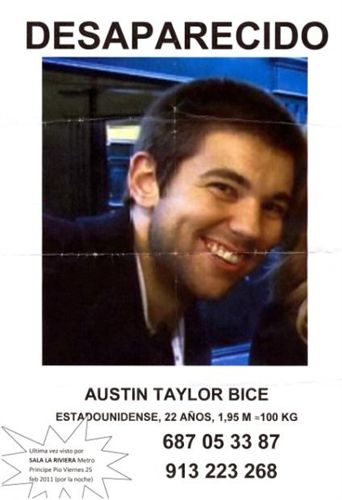 Madrid police, along with family and friends of 22 year old American exchange student Austin Bice, have stepped up a search, a week after Bice went missing from a Madrid nightclub. Bice was last seen outside a nightclub, Riviera, where he was told to rest a moment before entering as he appeared to be not feeling well.

A friend stayed with him for a few minutes until Bice, without passport or credit cards, said he was going back to his room. The alarm was raised the day after when the family he was staying with realized he wasn’t in his room. No sign has been seen of him since. Friends and family say Bice doesn’t drink very much and is certainly “not a partier”. Bice has two cell phones, but there hasn’t been any answer at either.

Austin Bice is six feet four inches tall and has only been in Madrid for just over a month.  Posters have been placed all over the city in an effort to find him. If you have any information, contact any police station in Madrid.