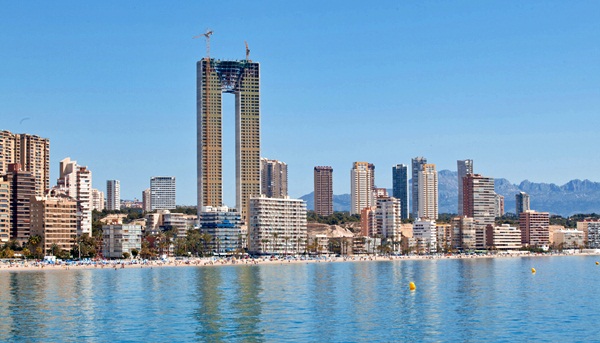 I had to laugh when I read an article from El Pais today about the InTempo building in Benidorm, as it documents exactly what went wrong with the InTempo building from beginning of construction onwards and why, more than a year behind schedule, it’s still nowhere near being completed.

What is the InTempo building in Benidorm?

InTempo, you may or may not remember, is that massive eyesore apartment building that pops up out of the middle of Benidorm and can be seen from miles away. It’s actually the EU’s highest residential building and, if my opinion has any value, just about its ugliest as well.

As if it’s not bad enough how ugly InTempo is, of course, it’s even worse when you find out exactly how many mistakes were made in the building of the monstrosity, how many people were harmed because of them, and how many people and companies are to blame.

Just some of InTempo’s many problems

From the now-defunct Caixa Galicia giving a 92-million euro loan to the developer (and some people still wonder why they went bankrupt?) and then not getting timely repayment, to construction workers not being paid, or workers being severely injured when an elevator plummeted several storeys and ambulances couldn’t get onto the site as a vehicle access way hadn’t been built as a cost-saving measure, it’s amazing InTempo has been completed as much as it has.

Do read the full article at El Pais.

It is a good indication of what has been so wrong about much of Spain’s construction industry and why it’s still having problems now, as well as the ineptitude of people in Spain’s banking system, and the country’s high corruption rate.

Meanwhile, InTempo is due to be completed in December, 2013, or at least that’s what the developer says.

Coincidentally, that’s the next time I’ll be in Benidorm and, frankly, I’ll believe it when I see it. Or not, as the case may be.