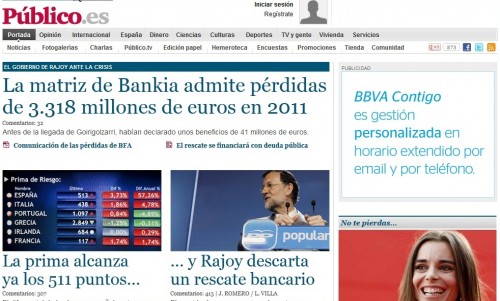 Unfortunately, if you cannot read Spanish, the only one currently available in English is El Pais.

El Pais – It is actually not updated in the English section as often as a major newspaper should be (it’s Spain’s top-selling newspaper), so if you can read Spanish, check out the Spanish website for the newspaper as well. El Pais is classified as a left-wing, Social Democratic newspaper

Público – My favorite Spanish newspaper, Público was a well-selling left-wing Spanish newspaper that ceased publication in February 2012 when the owners couldn’t raise enough money to keep it  going.

They did, however, manage to keep the online newspaper publishing and, so far, it seems to be doing well. I like it as it’s well-written, is updated often, and includes lots of photos and videos.

El Periódico – Being based in Catalunya, El Periódico publishes two editions every day – in Spanish and in Catalan – as well as has an excellent website for readers of the Spanish language. It’s classified as center-left and progressive in its views.