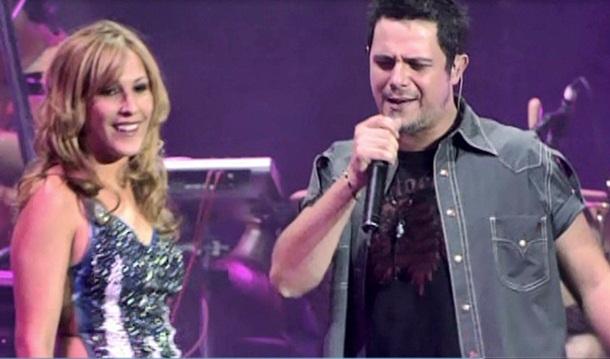 It iss no secret to anyone who knows me that I’m a huge Alejandro Sanz fan. What they might not know, however, is my favorite Alejandro Sanz song. That is a song that Sanz performed live in concert with Spanish singer Malu in La Plaza de toros de Las Ventas de Madrid in 2004. The song is called ‘Aprendiz‘.

‘Aprendiz‘ is actually a song Malu herself released back in the late 1990s. While her solo version is beautiful, there’s something about adding Alejandro Sanz singing it with you that makes it just so darned sexy.

Plus, as Malu looks amazing, it is also fascinating to see how Alejandro Sanz reacts to her. He was quite smitten, I would say.

I only mention Alejandro Sanz and Malu singing ‘Aprendiz‘ as I recently found a video of it on YouTube and it reminded me to share it with all Seriously Spain’s viewers. You really should watch it. It’s fabulous.

Don’t forget too, if you’re a big Alejandro Sanz fan like I am (come on, he’s Spain’s best ever singer), you must buy the concert DVD this song came from.

It is called Alejandro Sanz – En Concierto – Gira No Es Lo Mismo 2004 and is a 2-DVD set with 18 live songs plus concert footage backstage and a ton of extras.

You can buy Alejandro Sanz – En Concierto – Gira No Es Lo Mismo 2004 at any good DVD/CD store or at one of the online music sellers. Now listen to Sanz and Malu singing ‘Aprendiz‘ in the HD video below — it is absolutely gorgeous.