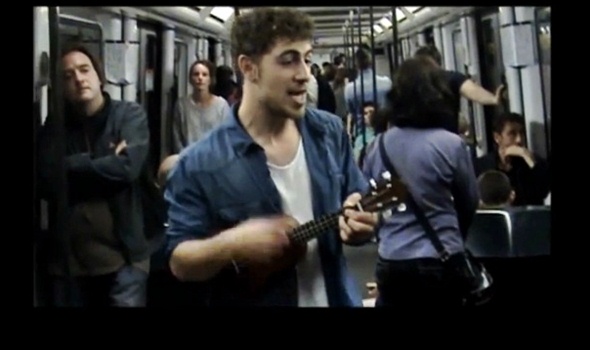 When you’re unemployed in Spain and you’ve been unable to find a job for months, sometimes it takes extraordinary measures if you’re ever going to work again. That thought must have occurred to Spanish journalist Enzo Vizcaíno who decided, if he couldn’t get people to read his CV (resume), then he’d sing it to them. On board a Barcelona metro train, to the accompaniment of a ukelele.

Singing his resume on a speeding train definitely worked for Enzo Vizcaíno, however, as not only did his video on YouTube go viral with more than 600,000 views, Vizcaíno has now been given a job by Channel 6, La Sexta, after appearing on one of their TV shows to talk about his experience.

When asked what gave him the idea to sing his resume on a train, Vizcaíno said he simply couldn’t afford to keep paying for CVs to be printed, especially as most companies he sent it to obviously weren’t even bothering reading it. So, with Spain’s massive unemployment rate, he had to come up with another idea. That idea was playing the ukelele and singing about how qualified he was.

By the way, Enzo Vizcaíno has an undergraduate degree in journalism, a postgraduate diploma, professional experience at a Spanish radio station, speaks English and worked in sales. All of this information was included in the lyrics of his song.

Now, however, he can put all this experience to good use as Vizcaíno has been employed by Channel 6 as a scriptwriter and reporter. Good for him, eh? And nice job, Channel 6.

Meanwhile, if you missed Enzo singing his resume, you can watch it below. No, he’ll probably never win any singing competitions but I’m sure the newest employee at Channel 6 doesn’t care about that.