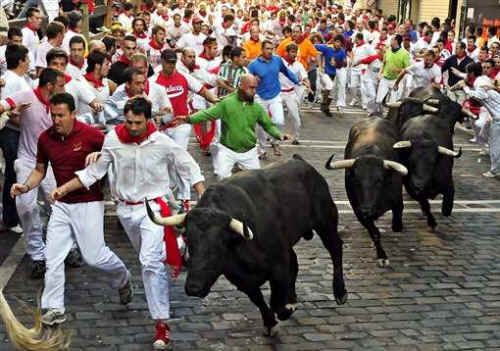 A killer bull named ‘Raton’, claimed its third victim in 10 years this weekend, when it killed a 29-year-old man in Spain’s Valencia region. The man died on Saturday, in hospital, after he climbed into the bullring in Xativa, was thrown in the air by the bull, badly gored, then dragged along the ground. It was several minutes before he was able to be retrieved onto safer ground.

The bull is a 1,1000 lb monster, which has already killed two other people in festivals over the last 10 years. Oddly, it’s name means ‘Mouse’.

Raton, however, is a huge moneymaker for his owners, who apparently earn €10,000 every time he participates in a festival. This is said to be because of his fearsome reputation, and because festival organizers can then charge higher ticket prices.

Witnesses did say the man killed seemed to be under the influence of alcohol, so his death may not be as cut and dried as it seems. Besides, anyone in Spain who steps into a bullring with a bull has already accepted any possible consequences, so you can hardly blame the bull. He’s just doing what comes naturally.