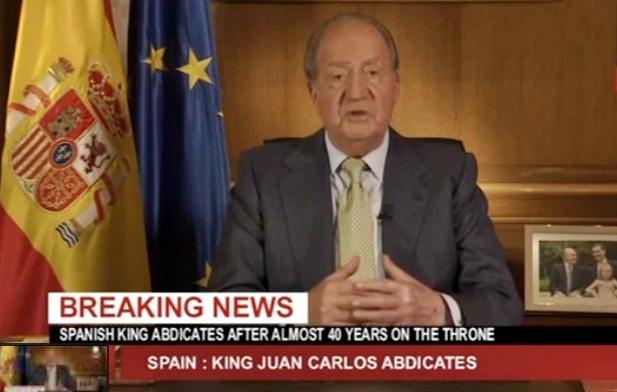 Sure, we all know King Juan Carlos has not been particularly popular in the last couple of years, due to an expensive elephant hunting trip during Spain’s struggle with austerity and a current corruption scandal involving his son-in-law the Duke of Palma.

But to hear the news today that King Juan Carlos of Spain is abdicating came as quite a shock to millions of Spaniards all the same.

According to Spain’s Prime Minister Mariano Rajoy, who announced the abdication on national TV a couple of hours ago, King Juan Carlos has made the decision to abdicate in favor of his son, Crown Prince Felipe.

The king himself then gave a live broadcast where he talked about having been on the throne for almost 40 years. He said that although he has enjoyed the “adventure” of bringing democracy to the people of Spain, and was thrilled with how successful Spain has become in recent years, he feels it is now time to hand over the crown to the next generation.

He also pointed out that the Prince of Asturias, Crown Prince Felipe, is “mature and prepared and has a sense of responsibility – all necessary to assume the leadership of the state and to open a new era of hope.” So he feels like he is leaving the kingdom in the right hands.

For more on King Juan Carlos’ abdication, watch the live broadcast from Euronews below.