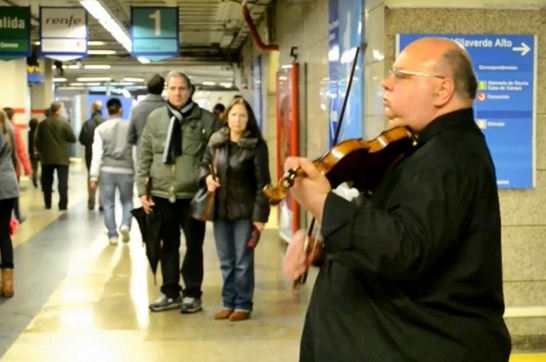 I thought this was a beautiful video of a Madrid street musician playing Vivaldi at the very crowded Metro Puerta del Sol yesterday. Street musicians, or “musico callejero”, as the Spanish call them can be found all over Madrid, particularly now when Spain’s economy is doing so poorly.

It must be particularly difficult to be a Madrid street musician nowadays, as so many Spaniards don’t even have enough money to pay rent or buy food, let alone give money to a street musician no matter how much they love his or her music.

But many musicians have taken to the streets all over Spain to perform as they’re finding, even with a few cents or euros given by passers-by here and there, they can often make enough money playing music in public places to survive. Some even say they make more money playing on the streets than they did at their regular jobs.

As you can see from the video this musician did get some donations while he was playing. Not surprising really as he’s wonderful.