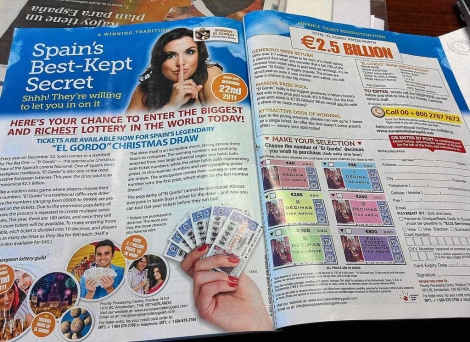 When you think the sleazy low-budget airline, Ryan Air, can’t get worse — it does.

Of course, some would say itis  a company’s right to sell a lottery ticket at any amount they want. The problem is, this company was obviously scamming its buyers as, in photos of the lottery tickets, the real price that’s printed on every El Gordo ticket was covered over.

For unsuspecting customers, that meant they had no way of knowing what the real price was, or that they were being scammed for four times the money.

Then again, when Ryan Air wants to charge you for going to the toilet on the flight, and has just jacked up their prices for check-in and carry-on luggage by 50%, it’s not surprising their in-flight magazine would carry such an ad.

“Ryan Air. If you want to be cheated, fly with us.”