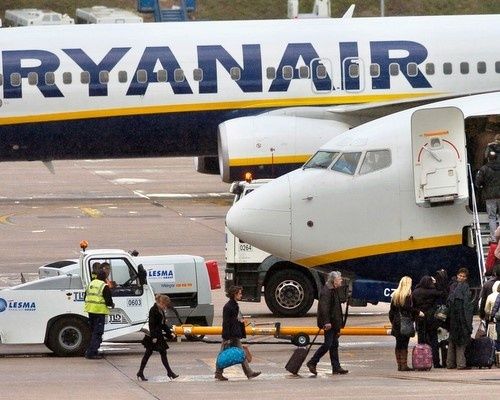 I would never fly Ryanair. Not only do they have the worst customer service practices of any airline in Europe, safety has always been a concern for me when it comes to Ryanair flights. So, it’s not surprising to hear that there has been yet another Ryanair incident in Spain in the last week, soon after the low-budget airline denied yet more Spanish children boarding last week. In the latest incident on Ryanair, this one however involved passenger safety. Something the Ryanair crew on board seemed to completely ignore, when the plane depressurized suddenly and oxygen masks fell.

The Ryanair flight in question left from Madrid Barajas on its way to Gran Canaria. Only a few minutes into the flight, the plane began to lose height quickly although no announcement as to why was made by the Ryanair crew. Some passengers then began to smell burning and soon after oxygen masks were automatically released. Some of the masks, however, were not working.

Ryanair crew still did not make a statement and, as one passenger said “seemed clueless”. Doesn’t make you want to fly Ryanair if you need to rely on crew expertise, does it?

The plane eventually turned around and headed back to Madrid where it had to do an emergency landing. Nobody was hurt but several passengers were treated for anxiety by medical staff at the airport.

This is not the first time a Ryanair flight has suffered decompression, nor the first time Ryanair crew didn’t even bother informing the passengers what was going on. A Ryanair plane in 2008 also had cabin pressure drop forcing another emergency landing. Again, Ryanair staff didn’t bother to let passengers know what was going on.  Again, some of the oxygen masks did not work. In this instance, however, 16 people were injured and had to be treated in hospital.

Two other Ryanair flights in Europe also had problems last week, with one struck by bedbugs that  had infiltrated the plane according to Publico.es. Passengers had to endure being bitten by bedbugs the whole way back to London from Rome. Looks like Ryanair may not be cleaning its planes properly either.

In a further incident, an engine failed on a flight from Croatia to Oslo, necessitating another emergency landing of a Ryanair plane, this time in Italy.

Ryanair is already being investigated in Spain for its insistence on only allowing pilots to carry the minimum amount of fuel, which is against Spanish law. What this means is, if there’s a delay, Ryanair planes cannot keep flying and, as happened in August three times, Ryanair planes are forced to make emergency landings. Ryanair, a safe airline? Not on your life.

In fact, what will it take before Ryanair starts conforming to normal airline safety procedures? A major Ryanair crash with several hundred people being killed? The way the airline is going, that could be the next terrible news about Ryanair.  All I know is I will never be one of those people on such a flight, as it will be a cold day in hell before I ever fly Ryanair.  How about you?