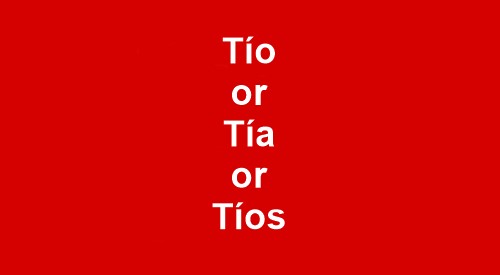 If you have spent any time talking to Spaniards in Spain, at some point someone has probably called you tío or tía (masculine and feminine versions of the same word), or talked about someone else using this slang term, or the word’s plural tíos .

If you were like me when I first moved to Spain, and spoke little Spanish, you may have been too shy to ask what that meant.

Thankfully, it is not only easy to translate into English, but the Spanish word tío or tía is just another of those cute slang terms people in Spain often use to refer to others.

The literal translation of the word into English would be ‘uncle’ for tío and ‘aunt’ for tía. In many cases in Spain, however, that is not how the word is used.

That is because, in modern day Spain, the word has been adopted as a slang term. That term is usually either a way of referring to just a generic person — “Who is your cousin dating?” “I don’t know. Some tío she met at work” (some dude/guy she met at work) — or it is used as a term of endearment from one friend to another.

You will also hear the plural version of tío and tía — tíos — used all the time in Spain.

Tíos is used in the same way a native English speaker would use the word ‘guys‘. “How’s it going, guys” in Spanish is ¿Qué pasa tíos?

So, the next time someone refers to you by the term tía or tío, or includes you in their ¿Qué pasa tíos?,  just smile and reply. Safe in the knowledge you are now classified as being as much of a local as the rest of them.

Now watch the handy video from Learn Spanish Free below to find out exactly how to pronounce tío, tía and tíos in Spanish.

And, if you keep hearing another slang term — guapa/guapo — and don’t know what they mean either — here’s another quick Spanish lesson that may just help.