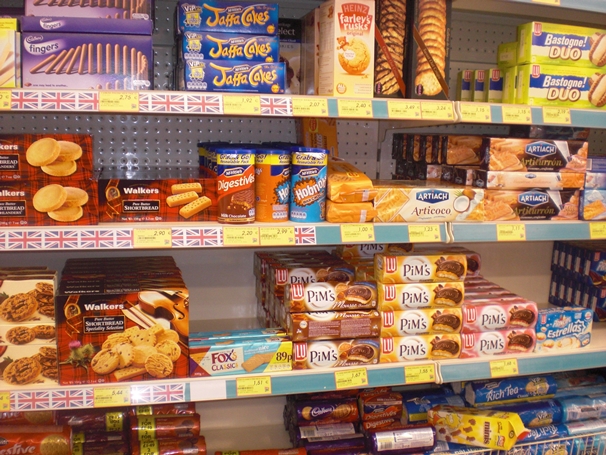 For many would-be British expats, moving to Spain seems like a good idea until they think about not being able to get typical British food. What would life be like without pork pies, Cadbury’s chocolate, Jaffa Cakes, Walkers Crisps and Heinz Baked Beans?

In fact, you don’t have to worry at all. No matter where you are in Spain nowadays, there’s a shop not too far away that sells huge amounts of imported British foods and, in some towns, there are ten of them.

On a recent trip to Albir, Spain, for instance, we found two British shops that sold just imported British food. Albir being a typical Spanish town populated with both Spaniards and expats, you can pretty much guarantee many similar sized Spanish towns will have a similar selection of British food stufs.

I’m talking biscuits, cakes, pies, cereals, yogurts, crisps, tea, drinks — anything you could ever possibly miss from back home.

So, if you are thinking of moving to Spain, even if it is just for a few months or a year, don’t worry about the food (although Spanish food is pretty darned phenomenal too). You will be able to find so much imported British food in most areas of Spain, you won’t have time to miss the UK. At least when it comes to your daily meals.

Plus, if you’re really not sure what’s available in the area of Spain you’re thinking about, take a quick mini-trip to the area and do some checking before you commit to moving. You will probably be amazed at what you find.

As a last resort, if you can’t find everything you’d like, don’t forget about The British Corner Shop, one of the internet’s best food companies.

You can order all your imported British food needs you can’t find in Spain online here, and they will deliver them to you almost anywhere in Spain (and in the rest of the world). With more than 8,000 products to choose from, you’re bound to find exactly what you’re looking for.