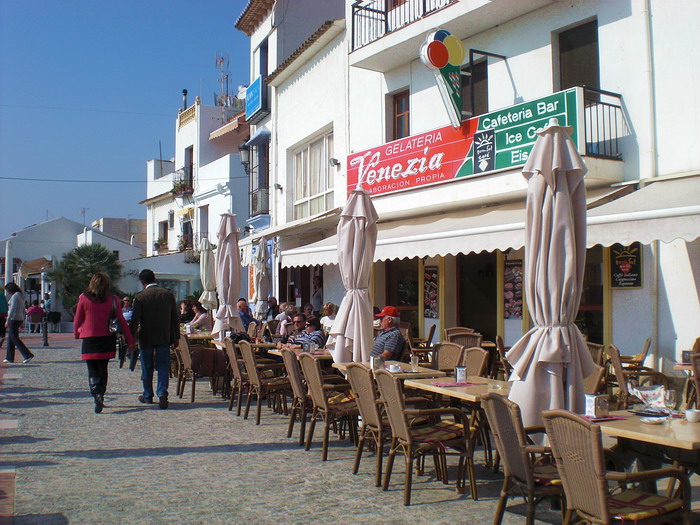 With many western expats choosing to move to Spain and make it their home, what are the top reasons most of them do so? That’s easy – the incredible food, superb climate, lovely people and more.

Spanish Food – Many western expats in Spain think Spanish food is just about the best food in the world. Starting with the national dish of paella (flavored rice and seafood), to the incredible salads and vegetables, superbly fresh and varied fruit, succulent meats, cheeses, sausages and hams, olives and olive oil, wonderful desserts and, of course, the world’s best breads – every meal in Spain is a dream come true.

Spain also has a typical Mediterranean diet which, as it’s seen as one of the healthiest diets in the world, is why Spaniards live so long.

With many western expats leaving countries where the food is only so-so, when they arrive in Spain it really is like they’ve died and gone to heaven and, if you eat like the average Spaniard, a decadent heaven at that.

Food in cafes, restaurants and hotels in Spain is phenomenal and don’t forget Spanish supermarkets. With a variety of imported foods (which American supermarket do you know that has Spanish, French, Italian, British, Swedish, Norwegian and German food, all in the same few aisles?), few supermarkets anywhere rival an average one in Spain.

Just walk around any Spanish supermarket in an expat area of Spain and it’s packed with expat shoppers from the minute it opens to the minute it closes and, boy, are their baskets full.

Spanish Weather – The weather in Spain, for the most part, is lovely. Colder but still warm enough in the winter to enjoy an outdoor lifestyle and hot in the summer (yet usually a much dryer heat than other parts of the world), waking up almost every morning to a blue sky with no clouds, how could any western expat pass that up.

Most areas of Spain get 300 days a year of sunshine, and the Spanish love an outdoor lifestyle, which western expats fall right in to as well. Hikes in the mountains, walks along the beach front promenade, leisurely drinks in outdoor cafes, football in the park and sailing, fishing or surfboarding on the ocean – in Spain when you’re outside, you’re happy and healthy. It’s no wonder the Spaniards are the world’s second-longest living people.

Spanish People – The people in Spain are relaxed, friendly and welcoming, and they love a laidback lifestyle, full of good food (God, how the Spanish can eat), great conversation and a life filled with family and friends.

For western expats coming from more somber countries like Norway and Germany, getting to Spain and being surrounded by happy, smiling Spaniards, it’s no wonder many of them never leave.

In Spain, much of life is about community – friends, family and neighbors. In many Spanish towns, everyone knows everyone and part of the fun of your day is having a chat with your neighbor over the front wall, checking in with your friend at the local bookshop to find out if she heard the wind last night, or just sitting at a sidewalk cafe over coffee and watching the world walk by.

Spanish Lifestyle – The lifestyle in Spain can’t be beaten by any other country. The Spanish love nothing more than having a leisurely breakfast with copious amounts of superb coffee, then heading off to work for a few hours. After lunch, (which is large and usually eaten with family or a big group of friends), then it’s off for siesta for a couple of hours (2-4:30pm usually), where they nap and get ready for the evening. Back to work for a few more hours then, the day is over, and now it’s a cafe or restaurant for a slow, wine-filled night with friends.

In Spain, there never seems to be any rush to get anything done yet it does get done – simply in its own time. Spaniards love to take their time at doing things and, after years of being in countries where rush and stress are the norm, a western expat moving to Spain thinks he must be at heaven’s pearly gates.

Spanish Cafe Culture – Many expats adore cafes and love coffee, so the Spanish cafe culture suits them to a tee. Getting up in the morning, enjoying a cafe con leche on the way to work, a mid-morning break with another cafe con leche at a beach side cafe and, of course, yet another one with lunch.

Spaniards adore sitting in cafes and enjoy life going on around them. Most western expats too arrive in Spain and, within days, have already fallen into that cozy Spanish cafe culture they’ll likely never break away from. It’s a perfect way to make friends too.

Spain is nirvana for hundreds of thousands of western expats and it’s easy to see why.