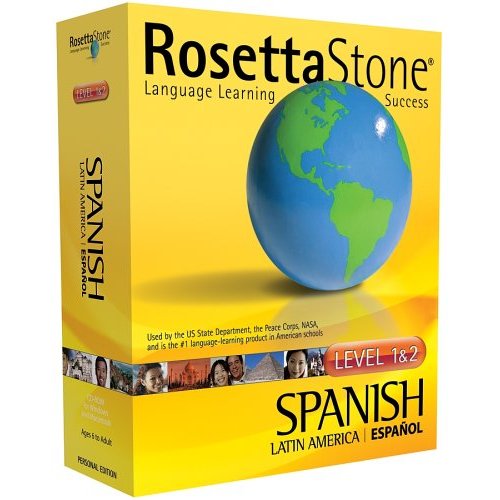 When I first started looking at self-study programs to learn Spanish I automatically concentrated on the two top programs – Rosetta Stone and Rocket Spanish. In the past, I had learned another language by using Rosetta Stone (Thai) so, of course, had more familiarity with the program.

But…..as several websites were recommending Rocket Spanish, and it’s slightly cheaper than Rosetta Stone, I borrowed a friend’s computer to test it out before purchasing it. After only a few hours, I could tell Rosetta Stone was the superior Spanish home-study program — by far — and here is why.

Rosetta Stone Uses Pictures and Sound – Rocket Spanish Only Sound – As a former teacher, I can absolutely guarantee almost everyone learns faster from a combination of pictures and sound.

Rosetta Stone’s immersion program is amazing. You learn by clicking on correct or incorrect answers for vocabulary and grammar, while hearing the words and seeing the photograph of the object at the same time. Your brain remembers the vocabulary quicker and retains it longer.

With Rocket Spanish, you learn by listening and reading along with the book. After only three hours, I was so bored I can’t imagine finishing the whole course.

Sure, there are a couple of games on Rocket Spanish that come with words and pictures, but nowhere near the amount of vocabulary and grammar you get on Rosetta Stone.

Audio Files and Book – Both Rosetta Stone and Rocket Spanish come with additional audio files and a book — downloaded in PDF form, if you buy offline.

I found the Rocket Spanish book to be easy to read and fun. It also comes with a ton of flash cards you can print out and cut up, so you can test yourself when you are nowhere near a computer or CD player.

Plus, Rocket Spanish comes with audio files of the entire book — so you can read the book and listen to it at the same time.

The documentation that comes with Rosetta Stone is actually mainly nothing more than listings of words, phrases and sentences. A bit dull, but also not really that necessary as everything you need to learn Spanish to an advanced level is already included in the Rosetta Stone computer program.

Overall, on this one, if you like books, Rocket Spanish comes out a little bit ahead of Rosetta Stone — the only thing lacking in the Rosetta Stone program, I feel.

Just use the headphones and microphone that come with Rosetta Stone and speak into the mike. The program senses if your pronunciation is correct or not and grades you on it.

You can even look at a graph you get every time you speak, and see how closely your pronunciation matches that of the Spanish native speaker.

I found it a great way to improve my pronunciation and spent quite a bit of time repeating the words over and over again to try to get the graph to look better.

More Levels with Rosetta Stone – Rosetta Stone offers a complete course of everything, from beginner Spanish all the way up to High Advanced. A total of five levels in all.

Total hours in the Rosetta Stone Spanish program are around 250 hours – which gets you to High Advanced level for the average learner.

Rocket Spanish is also one course — Beginners to Advanced — but as it’s a much smaller course, the information, vocabulary, grammar etc they include is a lot less than what you get with Rosetta Stone. Remember, it’s only $99. You get what you pay for.

I had a few lessons with a woman in Barcelona that were incredibly helpful, especially to get over that initial shyness around first speaking to a native speaker.

The Cost – Of course, Rocket Spanish is a little bit cheaper. Only $99 for the whole thing. But for the extra $50 or so that you will pay for Rosetta Stone you get so much more, it is well, well worth the difference.

Of course, if you have some extra money to spare, I say buy both programs and follow both. Both are excellent ways to self study Spanish. I simply feel Rosetta Stone has the edge and my experience bore that out.

Oh, and yes, after five levels of Rosetta Stone’s Spanish course, I have ended up with a vocabulary of several thousand words and phrases, can easily hold a typical conversation anywhere in Spain and can now understand about 75% of Spanish TV. Not bad considering the course worked out at less than 70 cents an hour of study time.

For more information, there’s an excellent video below from an American paramedic who is learning Spanish by using Rosetta Stone because he wanted to be able to communicate properly with the Spanish-speaking people he treats in his job every day.

And to buy Rosetta Stone Spanish? The easiest way is through Amazon — great prices and they even offer free shipping.