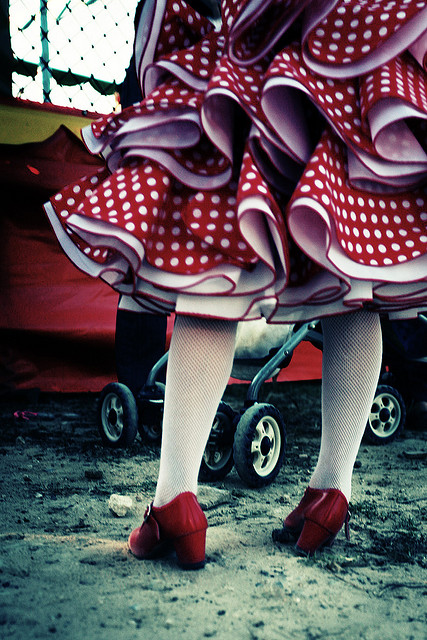 Some photographs just grab you and you immediately think, “Wow”. Such was the case of a set of feria photos, taken at a feria (festival) in Rota, Spain by photographer karynsig. The entire set is absolutely stunning, with shots of feet, the ruffles of dresses, groups of Spanish women all decked out in the most gorgeous clothing you’ve ever seen, and all in colors that slap you in the face.

In fact, after months of browsing through pictures of Spain on Flickr, I have to say these are some of the most interesting and beautifully photographed pictures of any I’ve seen.

The one I loved in particular was just a shot of a little girl’s feet in bright red shoes, underneath a red and white polka dot dress. If that doesn’t scream “Spanish feria”, I don’t know what does.

Although there are ferias all over Spain, Rota’s Spring Festival is known to be particularly fun with thousands of people in attendance over the four day event.