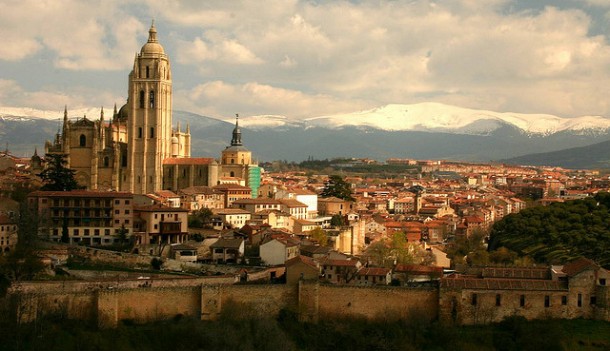 Segovia is known as one of Spain’s most beautiful cities. So it is not surprising to see this lovely shot of the Segovia skyline in 2004, and the next in our series of Featured Photos.

Segovia is a lovely city to visit. It is only 30 minutes from Madrid via high-speed train, and is visited by over 1 million people every year due to it being a UNESCO World Heritage Site.

Important sites to see include the Segovia City Walls, the Alcazar, the old Roman Aquaduct and the Museum of Contemporary Art ‘Esteban Vicente’.

Don’t miss the MUCES Festival either. It is the The City of Segovia Festival of European Cinema and takes place in November each year.

This lovely photograph of the Segovia skyline was taken by Frank Kovatchek under a Creative Commons License. He has some of his photographs on Flickr under the ‘Alaskan Dude’ pseudonym, and they are well worth checking out.