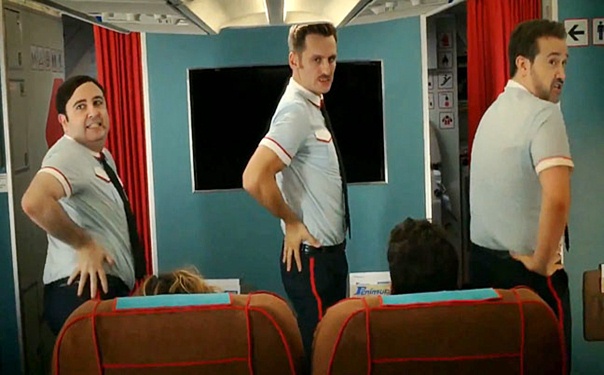 Anyone who loves Spanish movies knows Pedro Almodovar is the most famous, and most successful, film director in decades. Not only has he had massive hits with movies like “All About My Mother“, “Talk to Her” and “Bad Education“, but he is also known worldwide for his flamboyance and eccentricities, and for the overt sexual content in his movies.

In recent years, Pedro Almodovar looked at more serious and darker themes in his movies but, with the release of his new movie ‘I’m So Excited’, Almodovar has gone back to his early days and made a movie that’s all about sex.

‘I’m So Excited‘ tells the story of a plane load of passengers on their way to Mexico City. The plane experiences technical issues, however, and they’re soon trapped on the plane on the runway — for hours. (I’m So Excited, by the way, was filmed at the never-opened Ciudad Real Airport).

The movie being made by Pedro Almodovar, of course, this gives the crew an idea — add a drug to the drinks they’re serving that will get rid of everyone’s social and sexual inhibitions. Now there’s a plane load of people who are dying to tell people what they think and even more desperate to have sex if they’re in business class, or sleeping the entire movie in economy. And, yes, that’s funny.

If you are looking for a light-hearted escape from the real world that is funny, silly and ‘all about sex’, I’m So Excited’ will definitely be your cup of tea.

Meanwhile, check out the short video from Channel 4 News below. It is an interview with Pedro Almodovar where he not only talks about ‘I’m So Excited’ but also says how the movie uses metaphors to talk about the many problems in Spain today (economic crisis, a crisis of democracy) and how people are being affected.

This is why I love Pedro Almodovar. He’s always surprising with every movie he makes.And always really, really fun.