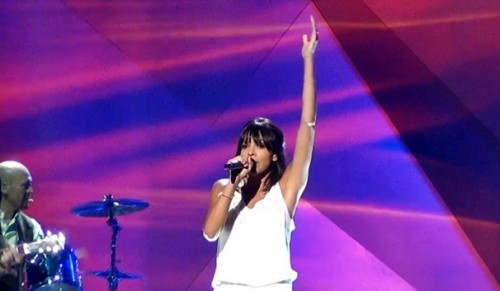 Singers still in the Eurovision Song Contest 2013 have been practicing today for the final on Saturday. Included in the rehearsals was Spain’s entry, ESDM, with their song ‘Contigo Hasta El Final” (With You Until the End). Spain’s ESDM, also known as El Sueño de Morfeo, of course, is already through to the finals on Saturday as it’s one of the “Big 5 countries” that are automatically accepted — the others being the UK, France, Italy and Germany and also Sweden as host country — but a practice rehearsal certainly isn’t going to hurt.

ESDM’s rehearsal of ‘Contigo Hasta El Final’ actually went very well and, I have to say, the more I hear this song the more I absolutely love it. Spain has an excellent chance to win the Eurovision Song Contest 2013 with this one. I’m sure of it.

Meanwhile, the first semi-finals were held yesterday with 10 finalists making it through to Saturday’s big event. The 10 that made it were:

Six countries were eliminated. They were:

The second semi-finals are due to take place in the next few hours, with ten more countries being sent through.