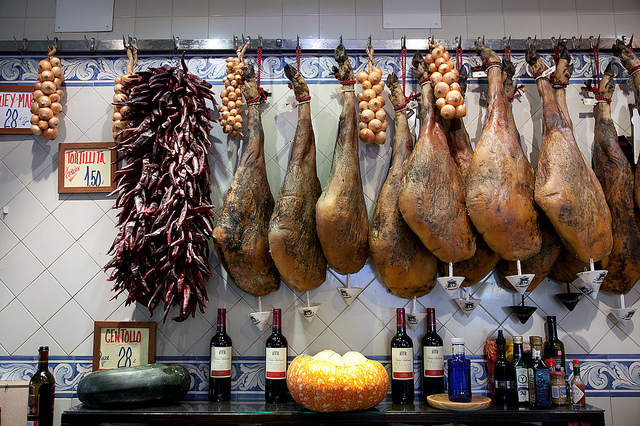 We’re starting a new feature on Seriously Spain – Featured Photos. Every time we come across a photo on Spain that we like online, that is allowed to be published with a Creative Commons or Public Domain license, we’re going to feature it here, with a link to other work by that photographer.

After all, Spain is an incredible country – one of the most photogenic in the world, so we really want our readers to see just how beautiful it is.

That being said, we’re going to start off our ‘Featured Photo’ section with our very first photo – a photo of Spanish jamon.

Spanish jamon is the best ham in the world, and adored by Spaniards and foreigners alike, and this photo by ornello_pics on Flickr is absolutely gorgeous.

Look at the texture on the legs of hanging jamon, the dark red chili peppers, the bottles of wine, and the lovely Spanish tilework behind. If this photo doesn’t just scream “Spain is amazing”, we don’t know what does.

The photo is published with a Creative Commons License.